This brief blog was triggered by a Tweet by @MrBlachford. He said that a school’s behaviour policy mattered. That is true and you will know that my belief is that if a child misbehaves in more than one lesson the responsibility for action lies with the leadership of the school and not with the teacher, primarily.

I am thinking that this might change the focus to be closer to that which we want. Learning.

We would do many of the things that a good behaviour policy would contain but what else might it make us focus on?

I have to admit that I like Bloom’s taxonomy. He wrote a few but the education one that is a pyramid. Recently on Twitter the discussion has arisen again with the original intention of the idea, not an experimental thing by any means but an idea – a framework as Bloom called it, with the original idea of knowledge being the critical fundamental to the ‘higher order’ skills. The pyramid nature of Bloom’s is probably what causes the issue. Bit like a ladder or a hill. The temptation is to think the top of the tree is the place to be. Somehow it has more value that the base. You can see a long way from the top of the tree.

Doug Lemov suggests this redrawing. The foundation, knowledge, is the fuel that leads us to the top. It does increase the emphasis on knowledge, the knowledge needed to be able to evaluate and to be creative. But it still has the implication that the important thing is the top.

@daviddidau bloogged about Bloom’s and constructed his own take on the diagram.

It has lots of stuff in there and needs time to digest. is it saying what Bloom’s encapsulates with his big fat foundation of knowledge? Interesting representation but I quite like to stick with a more formal and better tested version,. Something closer to Bloom’s original.

@dylanwiliam gave us this. 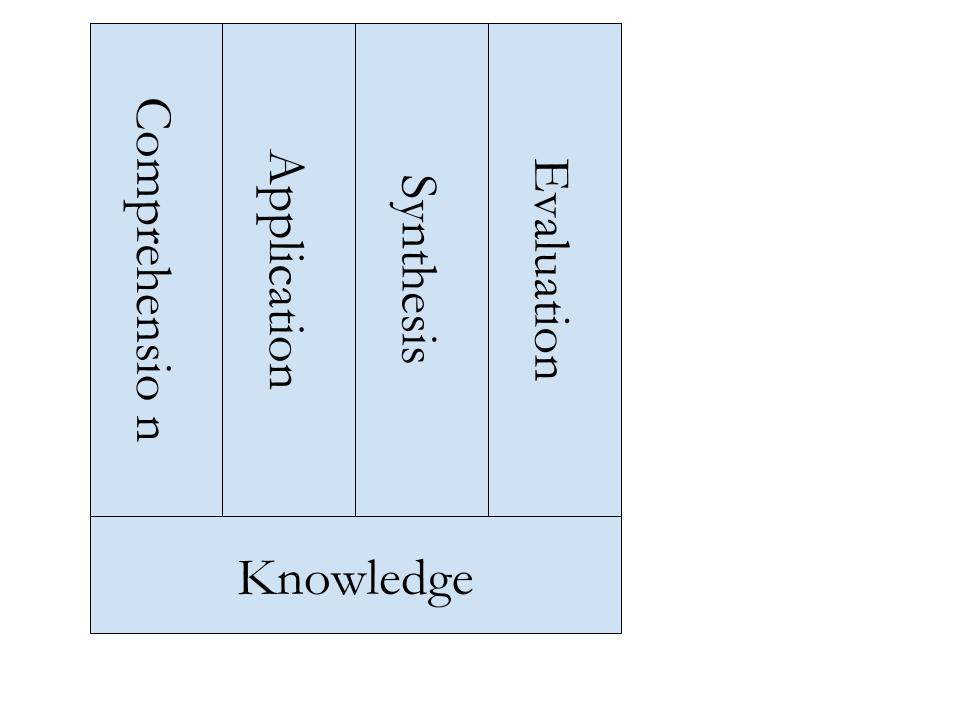 My problem is that I don’t see how comprehension, understanding of the knowledge, can’t also be fundamental. What asked Dylan said he did not want comprehension to be implied as leading to the others. It might depend on how you define knowledge. Is knowledge a rote thing? if it is then we do need comprehension.

I have played around with Dylan’s diagram. I have tried this: 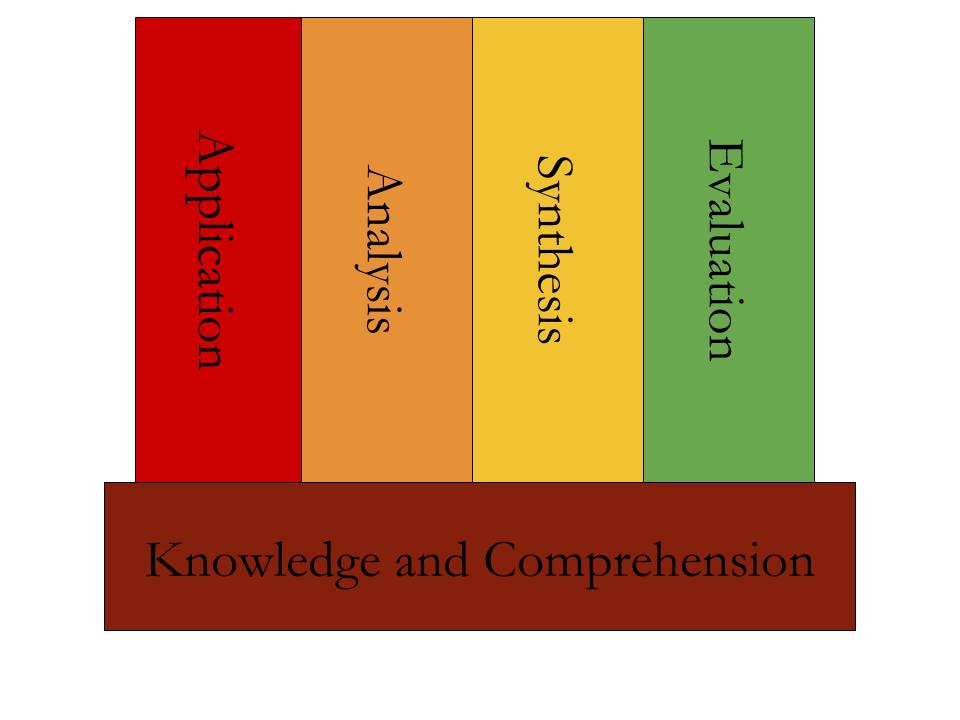 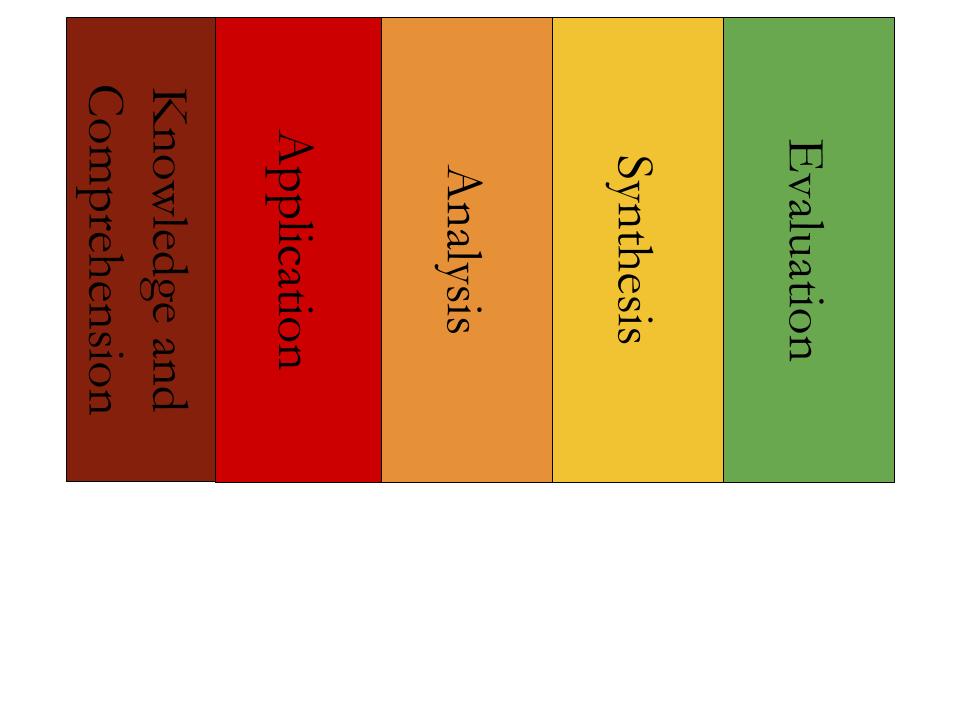 Not sure any of them work in all circumstances. But do any stop the silly rush to the top of the pile?

Promoted by @gragAshman’s piece entitles The Ministry of Silly Hats   that he wrote sometime in 2013 I decided to respond. I like Greg’s work and blogs which are well evidenced and often fit with my own less evidenced but feel-right views. I had mentioned on Twitter that I thought Six Hats was ok and while I know a number of other folk on Twitter disagree I have never seen any evidence to oppose. I was told that if I expected another to use the six hats system then I needed to provide the evidence. I agree. I am not directly promoting the use but I’d be happy, in an odd sort of way, for someone to show it is wrong.

I have not found any contrary evidence. My positive view comes from my own use of the process, developed by Edward de Bono. His proposition is that in the West we tend to knowcj=k ideas down; find things that are wrong with something rather than explore and seek solutions. We tend to have a reaction to an issue which is less concerned with the evidence or benefits than with whether or not an idea fits with our own current views. That seems to me to be true.

I have used Thinking Hats for quite a while and though not all my thinking by any means uses the discipline, probably I am too lazy and want a quick answer, when I do use it I feel I have better explored the issue. I probably come up with a more mellow response than I do when I just react.

A couple of points that I want to pick up from Greg’s piece.

I have never actually put on a coloured hat to identify the ‘type’ or mode of thinking. I do think that is silly. It s what might happen in The Office! I am not sure if de Bono himself actually wanted the hats to be real things.

Greg says that thinking depends on knowledge. Bit of a truism there. Who would deny that? Well ……… no, different post! Keep the focus. he implies because there is only one white hat that the status and value of knowledge is equivalent to any other hat. Not true. the white hat, meaning what knowledge do we have that might be relevant to the issue can be kept on for longer and put on more than once.

Anyway, I don’t mind being in a minority. I am not trying to get you to use Six Hats. I can’t find any research that either supports or denies that the system works. I have found it helps. perhaps that is just me. And generally, I like the work of Edward de Bono.

BUT he did write a book called Six Action Shoes. He says in the foreword to the book that he wrote in on an overnight flight from England to New Zeland. The book is unmitigated crap. It reads like a book written by someone hung over on a 24 hour plane journey!