Skip to content
manyanaed Uncategorized June 30, 2013 3 Minutes
“Something to do with the Giant’s Causeway…..”
Building story telling paths in MFL using the SOLO Taxonomy
I have been experimenting with the SOLO Taxonomy with some of my KS3 classes in French and Spanish since February. As a result of the work that I have been trialling with another colleague, I was asked to provide some INSET training. I must admit that I had not considered using hexagons in MFL until another colleague’s comment during one of the sessions led to a connection being made in my mind. He is an Irish mathematician and one of the questions that we asked him to answer during the session was: “Why do you think that hexagons are good shapes to use?” He did not realise that we were asking him that question because he is a Maths specialist, and he assumed that it was because he is Irish. His reply to us was: “Is it something to do with the Giant’s Causeway?”
I began to make a connection with storytelling and pathways and I created a series of lessons with this in mind. I taught a series of lessons on the past tense and when I was satisfied that the students were ready to start to be creative with the structures, I taught the following two lessons:
Lesson 1
Task 1. – The big question (a dramatic picture of the Giant’s Causeway was projected on the board) “What has this picture got to do with telling stories?” This question resulted in some interesting links being made between the natural world, storytelling being our original science, pathways and structures made with hexagons and some interesting theories about giants and bees thrown in!
Task 2. – Hexagons. Pupils were given small hexagons in an envelope and they were asked to write single words in French that would prompt them to say a longer past tense sentence.  For SEN pupils some words were already provided. During a short feedback session, pupils read out some of their words, which I then wrote on laminated giant hexagons and stuck on the board. 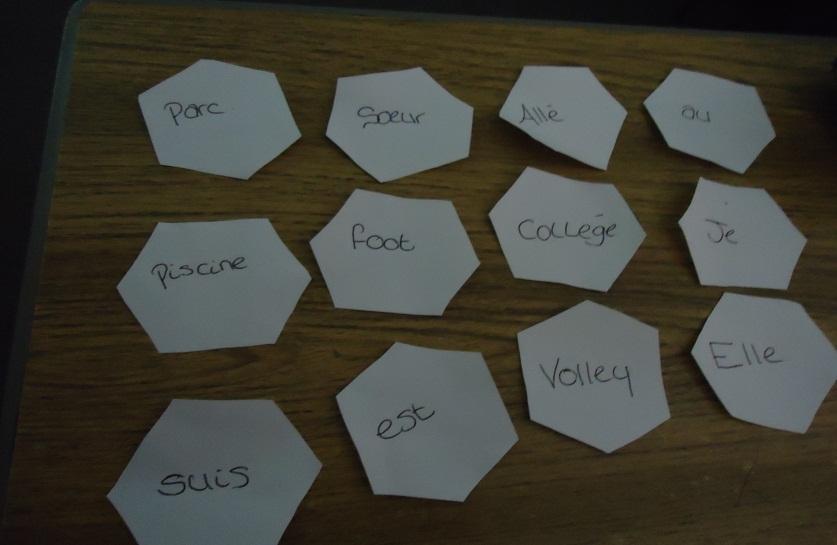 Task 3. – Oracy Pupils were asked to move their own hexagons around in order to make a path or structure. The path needed to allow them to tell a story. They were asked to plan the story in their heads and when they were ready, to tell the story to the person sitting next to them. Connectives, time phrases and verbs were naturally included as a result of the need to link the hexagons together.
Task 4. Pupil led demonstration – Eight students were invited up to the front and were asked to take one of the giant hexagons down from the board and to hold it up to face the class. Another student from the class arranged the giant hexagon holding students in order and then verbally demonstrated a story. We did this twice. 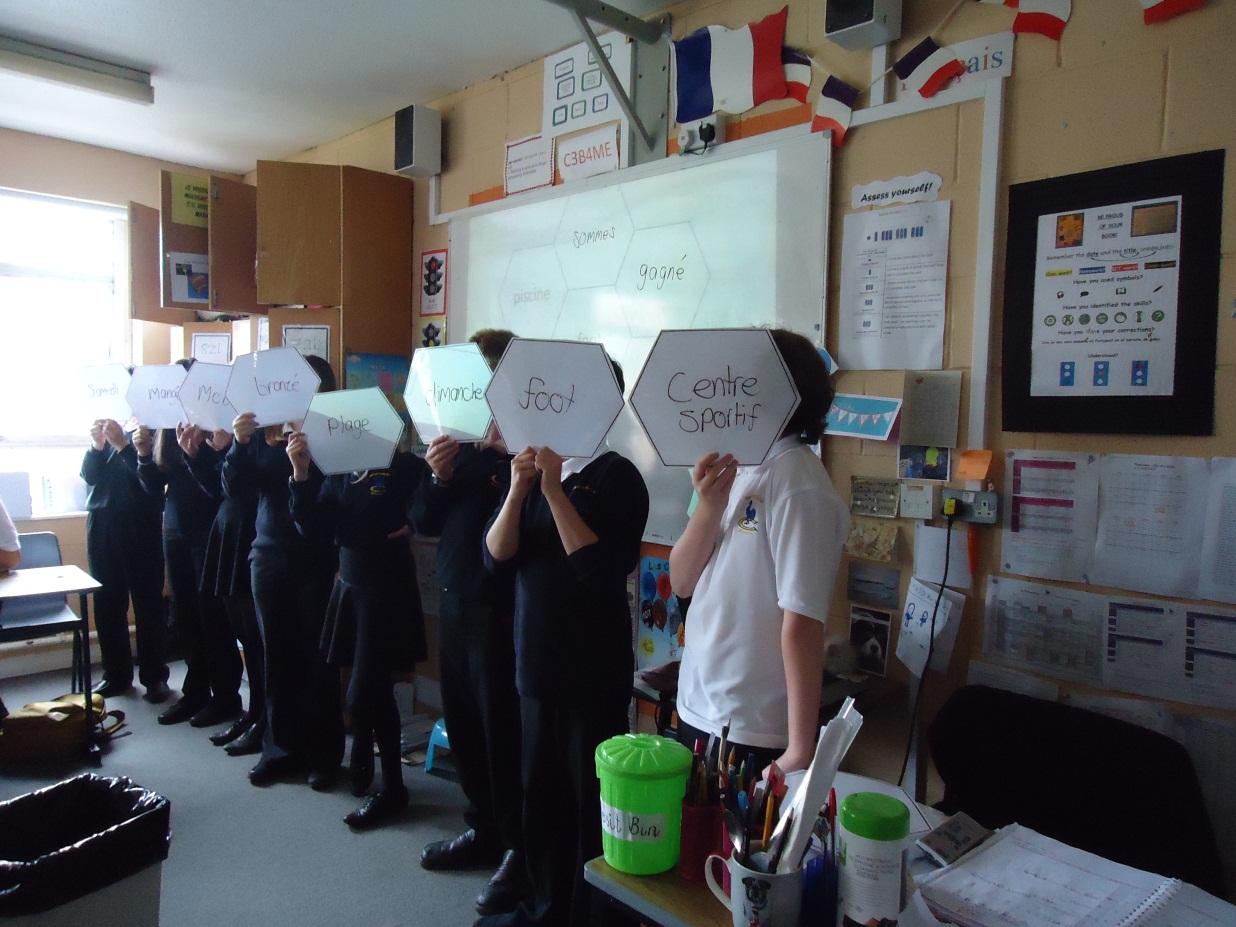 Task 5. Drafting Pupils returned to their seats, glued their hexagons into their books and used them to write a rough draft of their stories. 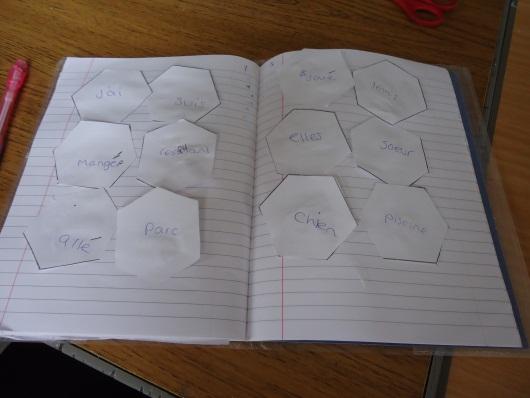 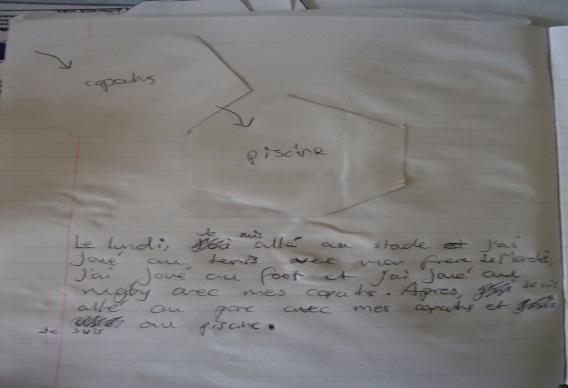 “Something to do with the Giant’s Causeway…..”
Building story telling paths in MFL using the SOLO Taxonomy
LESSON 2 – Let’s go outside!
I divided my class into mixed ability teams of five. I gave each group a giant hexagon to use as a template, some chalk, a mini whiteboard, pen and rubber and we went out to the yard. They were not allowed to use their notes.
Task 1. Path creation Teams were asked to draw hexagons on the floor with chalk in order to form a path. They then wrote single, French prompt words in each of the hexagons. 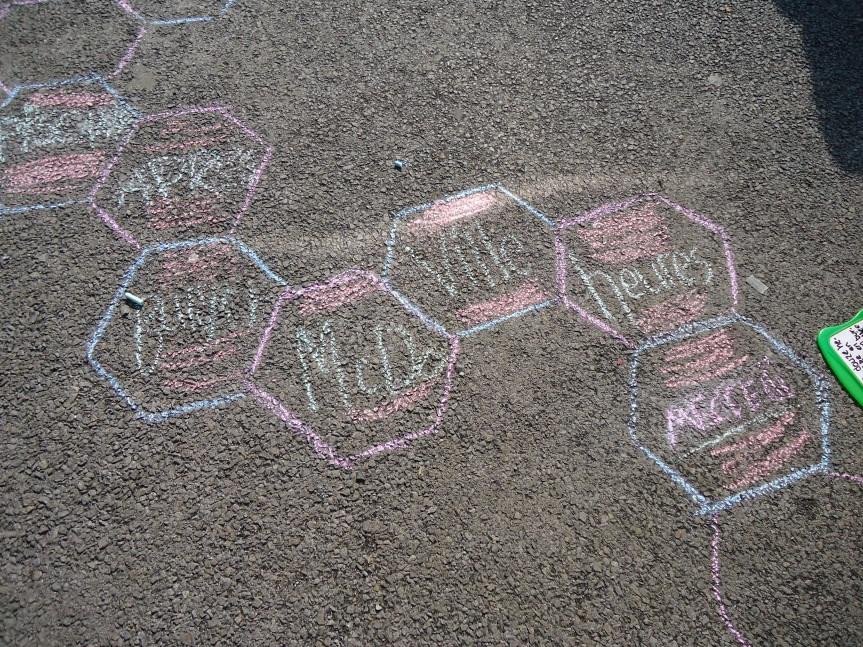 Task 2. Storytelling walk – The teams were asked to walk along their paths, telling the story as they went.  Another student recorded video footage of the outcomes for analysis next lesson. 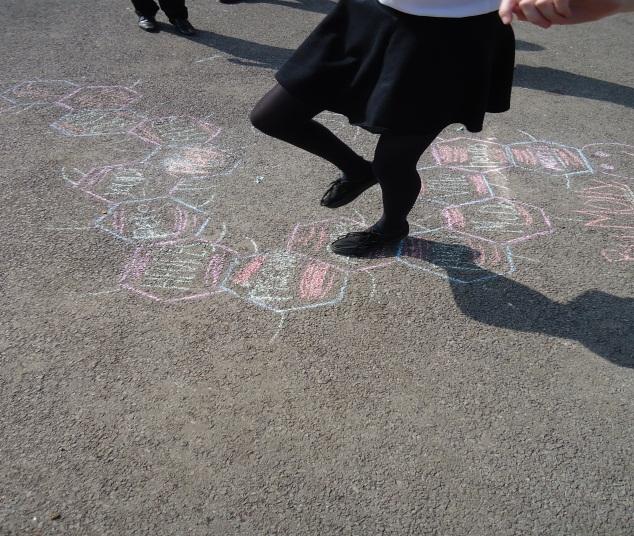 Task 3. Test their skills –Teams were asked to visit another team’s story telling path and to try to tell a different story.
“Something to do with the Giant’s Causeway…..”
Building story telling paths in MFL using the SOLO Taxonomy
Coming soon…………….
A class patchwork quilt of finished stories mounted individually onto coloured, illustrated hexagons